Ward Against Death by Melanie Card 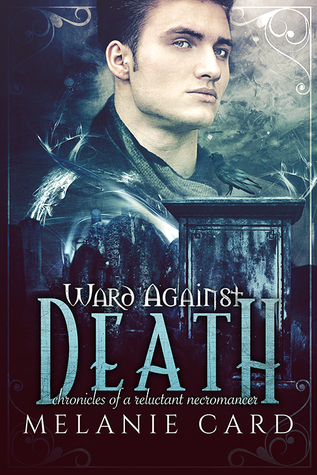 I received a copy of this book through NetGalley in exchange for a fair review.

Ward is a necromancer and a physician. He also takes part in illegal surgeries, which has left him on the wanted list in many regions. When he is hired to bring a woman back to life for her family's final goodbyes, Celia insists that she has been murdered, and she and a reluctant Ward run away to the sewers.

This is only the start of their ordeal. Now, they must avoid Celia's father's men, the local authorities, the places where Ward is wanted, and hope that Celia doesn't drop dead again in the streets. While trying to solve the mystery surrounding Celia's murder, neither she nor Ward are sure who they can trust, and they have to be wary of everyone, even each other.

Necromancy is such an interesting topic. I've always been drawn to stories about necromancy, raising the dead, and magic, but it seems that there are few books that actually specifically feature a necromancer as a main character. One could then imagine my delight as I stumbled across this title featured on NetGalley, and my excitement when my request was approved by the publisher.

This book had me hooked from the beginning. The action starts almost right away, as soon as Celia wakes up. Throughout the rest of the book, the action never ceased, the characters always had to face an enemy or a threat, and once I got into the story, it took a lot of effort to stop reading. Furthermore, the world that this is set within is captivating. I thought I'd get a fantasy set in the modern, contemporary world. Instead, it was set in a sort of alternative, fantasy world, where things like surgery are illegal and necromancers are a normal part of life. This made for a great world to escape to and lose myself in. The world-building was phenomenal, from the government itself all the way to the world of criminals.

Ward is such a great character to read about. He's quite funny, often clumsy or partially clueless, and he has his own unique charm. While I don't mind a flawless hero every now and then, to have an imperfect hero like Ward, quirks and all, was very refreshing. I immediately liked Ward and hoped that all would end well for him, which just fueled my need to read and kept me reading until my eyes were tired.

The other main character is Celia. Technically dead, she is a master manipulator, an assassin, and overall somebody you do not want to mess with. While she may be dead, she doesn't lose herself or sight of her goal: to find out who killed her. She was a complete daredevil, in my opinion. At times, she appeared reckless, but that only added to her character. She and Ward were fairly opposite each other, with Ward more timid and unsure, and Celia courageous and determined. This made for some amusing dialogue and situations, which added much-appreciated humor to this story of death and magic.

The main issue that I had with this story was the attraction or romance between Celia and Ward. While there isn't a full-blown romance within this book, there are many references to the characters feeling attraction to each other, at the very least. These things certainly can be weaved well into an action-packed fantasy such as this one, but the author didn't balance their attraction to each other with the main issue within the story. I would think, for example, that Ward would not be considering Celia in a romantic or sensual way, as he often did, while they were in such a dire situation. It seemed out of place and somewhat forced. I think that it would have been better if the author had toned down the romantic aspects within this book and saved it for the next in the series.

All in all, this tale of a charming, somewhat awkward necromancer and the lady that he has brought back from the dead is one that I enjoyed reading. While the romantic bits seemed a bit out of place for the situation at hand, the world-building was amazing and the action kept me turning pages for hours on end.

I recommend this novel to fans of stories filled with magic and action. If you're interested in a new adult / mature young adult book about necromancy, or a change from the usual vampires and werewolves of the paranormal and fantasy genres, this book is for you.

Find Ward Against Death on Goodreads